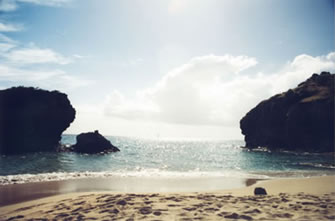 St. Kitts and Nevis are mountainous siblings representing two sides of one handsome coin, and sharing a St. Kitts-based government.

Nevis, the smaller of the two, boasts important historic sights: Nevis is the birthplace of American statesman Alexander Hamilton, and his former home is now a museum; Great Britain’s famed naval hero Admiral Horatio Nelson met and married Nevisian Fanny Brice here in 1787, and their marriage license is recorded at Fig Tree Church.

Visitors partake in watersports on Pinney’s Beach (home of the Four Seasons) and Oualie Beach, plus there’s mountain biking, horseback riding, hiking, diving and snorkelling trips. The local botanical garden contains one of the largest collections of palms in the region, and the Four Seasons golf course and tennis facilities are among the Caribbean’s finest. “Liming” – relaxing – at the various beach bars is worth a few lazy afternoons, while evenings are best spent on gourmet dining.

The history is no less rich on St. Kitts, which Christopher Columbus named St. Christopher after the patron saint of travellers, and the appellation was eventually shortened to St. Kitts. Nine forts guarded the island’s coastline, none more impressive than the massive Brimstone Hill Fortress; it is a wonderfully preserved UNESCO World Heritage Site today and well worth exploration. For beaches and watersports, head south to Frigate Bay, where most of the hotel rooms are located, or just beyond, to the Southeast Peninsula, where the island’s best white-sand coves ring the peninsula’s rolling hills and salt ponds. Watch for green vervet monkeys scampering across the road, dodging into bushes or looking for a handout at Turtle Beach.

In 2005 the island ceased production of sugarcane, although much of St. Kitts is still robed in waving stalks of majestic cane. The narrow-gauge railway tracks that ran through the fields to haul the cut harvest to the factory have been converted into a 17.5 mile scenic train ride offered from October to May, allowing visitors to experience a memorable and historic excursion – it’s the only train operating in the Caribbean outside Cuba.