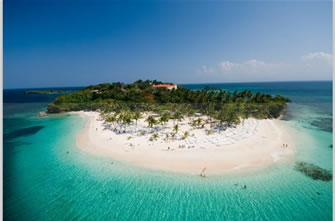 The Dominican Republic occupies more than half of Hispaniola, the second-largest Caribbean island. Travellers can indulge in a variety of activities; adventurers might seek out canyoning and windsurfing opportunities. Hikers can scale Pico Duarte, the Caribbean’s highest mountain at 10,000 feet, while 1,000 miles of sublime coastline offer relaxation. For cultural immersion, visit the centuries-old capital Santo Domingo, the New World’s oldest city.

The tropical wildlife is astounding. Within 19 national parks, 6 scientific reserves, 32 natural monuments, 15 natural reserves, 2 marine sanctuaries and 9 protected parcels of islands, there exist 5,600 plant species, 303 bird species and a rich underwater world. Many resorts are all-inclusive including those along the picturesque coastline in the Punta Cana/Bávaro area, where a sizeable coral reef draws scuba divers.

La Romana has the quaint Altos de Chavon artist enclave and a walled resort compound known for its three challenging golf courses, a polo field, horseback riding, sport shooting, tennis and a marina. Isla Saona, off the southern shore near Bayahibe, is a 45 square mile island with pristine beaches and mangrove-lined lagoons. The tiny 6 square mile Isla Catalina is a popular diving spot. The Samaná Peninsula has untouched beaches leading to brilliant coral reefs, gushing inland waterfalls and thick rainforests. The north coast is known as the Amber Coast because the gem of the same name is mined there. The beach at Cabarete is perfect for kiteboarding and windsurfing. At nearby El Encuentro, waves can get up to 14 feet high. In this jungle-rich region, adventure seekers spend time whitewater rafting, rock climbing and mountain biking. Two golf courses designed by Robert Trent Jones are among the country’s 21 exceptional golf courses.

To the west of Cabarete lies Puerto Plata with its lively beaches. San Filepe Fort, used by the Spanish to fight off pirates in the 16th century, is a tribute to colonial days. Ocean World Adventure Park in Cofresi boasts a dolphin lagoon plus a swimmable aquarium and an interactive shark pool. Baní and Las Salinas offer some of the best windsurfing options outside Cabarete, and don’t have the crowds, while the towns of Boca Chica and Juan Dolio are popular for their busy beaches. The fertile lands of Santiago, La Vega and the Cordillera Central Mountain Range are found in the central region. Known as the Dominican Alps, it is prime for hiking, cycling and river rafting. The island’s highest mountain, Pico Duarte, calls to expert hikers; it takes three days to reach the summit.